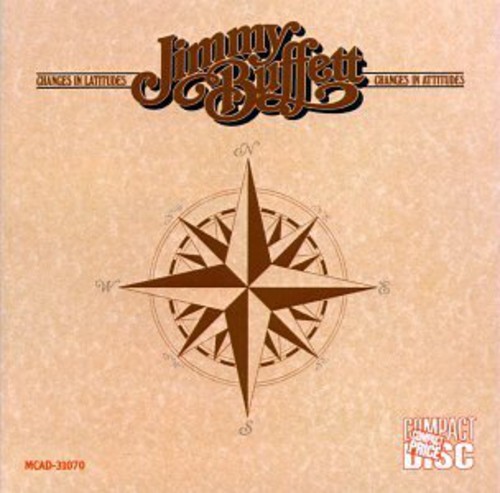 Greatest hits packages are one thing, but any Parrothead will tell you that to experience Jimmy Buffett's work in it's purest form, this 1977 album is the place to start. Includes Margaritaville, of course.

''Changes in Latitudes, Changes in Attitudes'' is the breakthrough 1977 album by American popular music singer-songwriter Jimmy Buffett. The album, his eighth, remains the best selling album of Buffett's career, and contains his biggest single, "Margaritaville". It was initially released in January 1977 as ABC AB-990 and later rereleased on its successor label, MCA.

''Changes'' was very popular and critically well received and was a transitional album on several levels for Buffett. In a commercial sense, it ushered in Buffett's greatest period of chart and airplay popularity - changing him from an FM cult favorite and minor hitmaker to a top-draw touring artist whose albums sold in the millions, receiving regular AM airplay at the time. ''Changes'' would be followed by equally popular and more grandiose expressions of Buffett's "Caribbean Soul" on ''Son of a Son of a Sailor'' (1978) and ''Volcano'' (1979). All of these albums would combine pop, bar-band rock, country, folk, and reggae influences with the professional production of Norbert Putnam.

''Changes'' also represented the beginning of the end of the "Key West Albums": the Don Gant-produced ''A White Sport Coat and a Pink Crustacean'' (1973), ''Living & Dying in 3/4 Time'' (1974), ''A1A'' (1974), and ''Havaña Daydreamin (1975). It is these four albums that capture the feel of early 1970s Key West, Florida and Buffett's experiences as a struggling musician and storyteller. Although the albums are not exclusively about Key West, they detail the laid back island ethos of the small island city and its pre-"condo commando" status as an American Casablanca...a place where no one knows your name and would not care if they did. At the time, Key West was a derelict navy town looking for a direction and was filled with small bars and restaurants craving troubadours like Buffett, Steve Goodman, Jerry Jeff Walker, and others who would play for bar money. The albums document life in the Gulf of Mexico Region ("Biloxi", "Banana Republics", "Wonder Why We Ever Go Home") with displays of touring craziness ("Miss You So Badly"). After ''Changes'', Buffett's scope grew to include the entire Caribbean and, later, the vast expanse of what would become "world music." Buffett's Key West experiences would pepper his later work (even recording his albums in Key West's Shrimpboat Sound), but not like it did in the 1973-1977 period. It is this period, along with the 1978 and 1979 albums that created the mythos Jimmy Buffett has parlayed into icon status as a performer, restaurateur, entrepreneur, author, and celebrity. - Wikipedia