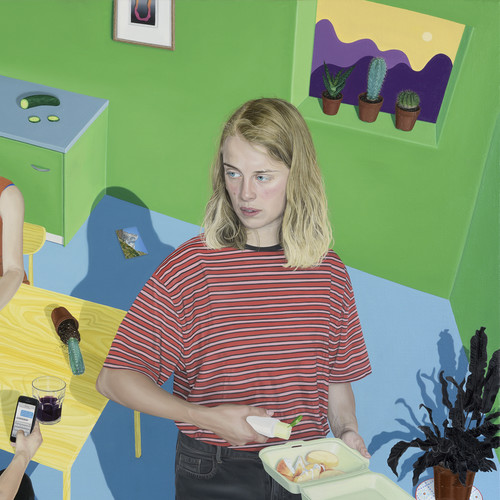 It's amazing how the floodgates open when you shut out all the internal and external noise, stop pandering to stereotype, cease listening to your anxieties, and disregard the compartment society has built for you. I'm Not Your Man, the Charlie Andrew (Alt-J, Rae Morris)-produced second album from Marika Hackman, begins with an impromptu hearty laugh. It's not the sound of silliness; it's the sound of liberation, spontaneity, and joy. 24-year-old Hackman is feeling more herself than ever. Life isn't necessarily funnier or happier, but when there's cause for a joke or a big ballsy statement, she's not holding back any more. The album took almost 18 months to complete, during which time Hackman switched to a new manager and a new label, transitions that yielded new avenues for exploration, a lot of time, and a lot of distance – mainly, she insists, from self-imposed boundaries. “I used to be very self-conscious,” explains Hackman. “If something sounded a bit too pop or like I'd heard it before I'd mold it into something different. This time around I thought, ‘fuck it, I'll just let it flow.’” The results of this semi-anarchic approach are evident in the grungier, catchier sonics of I'm Not Your Man, and the lyrics, which reveal an unhinged and shamelessly free Hackman. There's an open-ended nature to the lyrics, which delve into femininity, sex and sexual identity, millennial ennui, the pressures of living in a social media bubble, and the perils of being young in a fast-paced industry. “The record's all about female relationships, romance and breakdowns, but there's also a dim worldview going on. ‘I'm Not Your Man’ can either mean ‘I'm not your man, I'm your woman,’ or it can mean 'I'm not a part of this.’” Hackman cranked up the knobs in the studio, turning away from the quieter sounds of her past to realize her teenage fantasy of fronting a raucous band. “I wanted to let rip and lose control. When I was younger I wasn't looking at Joni Mitchell. I was looking at Nirvana thinking, 'I wanna be like that!'” To channel this feral female energy, Hackman recruited London quartet The Big Moon as her backing band. The results are a dynamic, multi-genre album tied together by razor-sharp wit. The sounds span from Cate Le Bon weirdness to Warpaint dirge jams to straight-up Britpop choruses. “People were saying it was a mash-up between Radiohead, Blondie and The Cure,” laughs Hackman, self-mockingly. “I can't wait to see the reaction,” she says. “That's the thrill of reinventing yourself. I might piss off a lot of die-hard folky fans but this is still my brain, it's still my world, and I'm gonna create it how I want.”