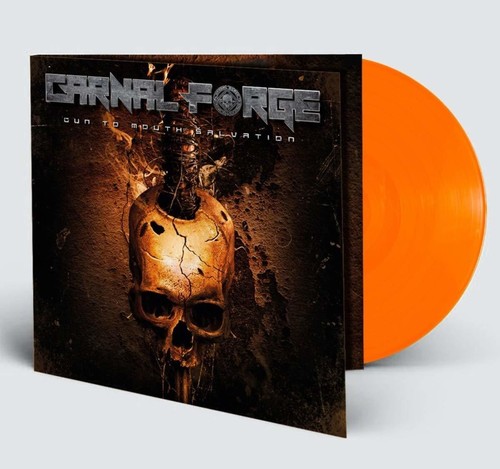 The most hard-hitting Swedish thrash metal band ever CARNAL FORGE" is back and has signed a record deal with Swedish label ViciSolum Productions. The band's new album "Gun to mouth salvation" will overtake the world on January 25, 2019. "Gun to mouth salvation" is Carnal Forge's first album since 2007 monster release "Testify for My Victims". Founder Jari Kuusisto says; "I quit Carnal Forge after the last full-length album Testify for my victims because I was just feed up with the music industry and everything about being in the band. It took some years but I felt I was kind of missing CF, so I talked to my brother Petri and I called up Lars in 2013 and said. Hey, let's fuckin' do it! He had been waiting since the hibernation in 2010 so it was a Go! Right on the spot. We made this mini CD to wake up the corpse and we did some shows but then we decided to not do any more shows until we had a new album and new fresh songs to play. It's a long boring story why it took so long time, but finally here we are now, ready to kick som serious ass again! And with us we also have Lawrence Dinamarca (Nightrage, Loch Vostok) and new vocalist Tommie Wahlberg." The Swedish thrash quintet Carnal Forge was formed by guitarist Jari Kuusisto in 1997 in Sala, Sweden. Since then the band has released 7 full length albums (ViciSolum, Candlelight Records, Century Media Records, WAR), 1 live DVD (Metal Mind Productions), toured in Europe, USA and Japan together with acts like Testament, Exodus, Halford, Nile, Amon Amarth, The Haunted, Immortal, Primal Fear, Pro Pain. Carnal Forge has played festivals like Wacken Open Air (DE), Sweden Rock Festival (SE), Summer Breeze (DE), Brutal Assault (CZ), Kaltenbach Open Air (A), Aalborg Metal Festival (DK), Fuck the commerce (DE), Metal Fest URI (CH), Pressure Fest (DE), Fury Fest (FR), Metal Meltdown (USA) and many more!
This website uses cookies to personalize content and analyse traffic in order to offer you a better experience.
I accept Learn More
back to top