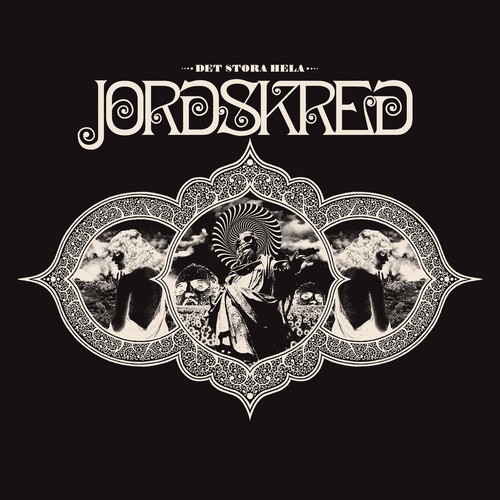 From prolific Sweden - the european Mecca for 70's golden age inspired Revival Rock, whose main ambassadors are the likes of Graveyard, Asteroid, Siena Root, Witchcraft, HĂ¤llas, Horisont, Hypnos, Svvamp, Three Seasons, MaidaVale, Agusa, Ball, Captain Crimson, Topplock, Abramis Brama and Svartanatt - comes the new record from the Jordskred collective titled 'Det Stora Hela'. This second long play from the nordic band based in the port town of Sundsvall boasts an airy, envolving, eloquent and majestic seventies inspired Prog Rock that promptly grips, absorbs and conquers us. Their immensely harmonious, charming, refined and sumptuous sonority leaves the listener relaxed and transfixed in an unshakeable state of ecstasy and fascination which carries from the first to the last track. Roughly 30 minutes tempered with disarming tenacity and spellbinding lubricity which mollifies and overtakes us with promtply intensity. Composing this luxurious nectar of revivalist essence are two altered guitars which greaten each other in faustian, captivating, dazzling and showy riffs, and then lose each other in admirable, marvelling, touching and venerable solos thought out and executed with impressing dexterity and precision, a dilligent bass with powerful, hipnotic, flowy and whispery lines which shadows and enphasizes every guitar digression, an intemperate voice, devilish and coated in native language which wobbles and kicks between the instrumental sagacity, as well as exceptionally jazzy drums with a sparkling, polished, delicate and stimulating touch which tick-tacks with ease, efficienty and preciseness all the flavored sound primacy that this 'Det Stora Hela' radiates.
back to top