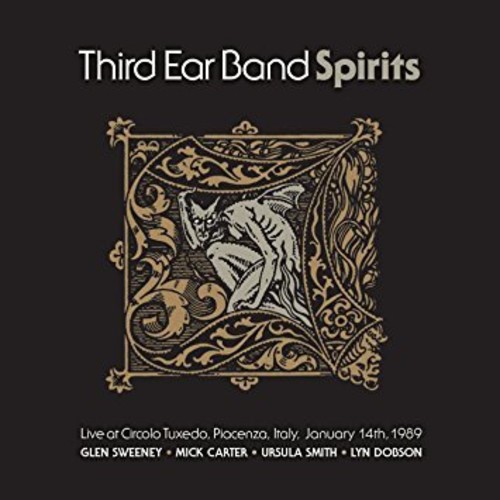 CD reissue. The Third Ear Band were one of the most interesting improvisational groups to come out of London in the late '60s. Unlike so many of their peers, they used traditional acoustic instruments rather than electric and electronic ones. Dave Tomlin was interested in free form Jazz, and initiated sessions of this music at the London Free School, and later at the UFO club. He was soon joined by drummer and percussionist Glen Sweeney, and the result became known as 'The Giant Sun Trolley'. Later they combined with members of another free improvisational group to become the Third Ear Band, whose first music was recorded with legendary composer and arranger Ron Geesin. Italian writer Luca Ferrari, who is an expert on the Third Ear Band and allied artists, has curated a series of record by the band for Gonzo Multimedia. He described this record thus: 'Recorded at Tuxedo Club, Piacenza (Italy), on January 14th, 1989, TEB's Spirits is a great live gig in a strange day-off tour date with a rare performance of Dave Tomlin's "Lark Rise" played by a wonderful line-up: Glen Sweeney (hand drums), Mick Carter (electric guitar and effects), Lyn Dobson (flute, sax) and Ursula Smith (violin); the same that played on another great Gonzo Multimedia's release - New Forecasts from the Third Ear Almanac. The Liner notes are by Luca Chino Ferrari and film maker Francesco Paolo Paladino who recorded a video from the concert.