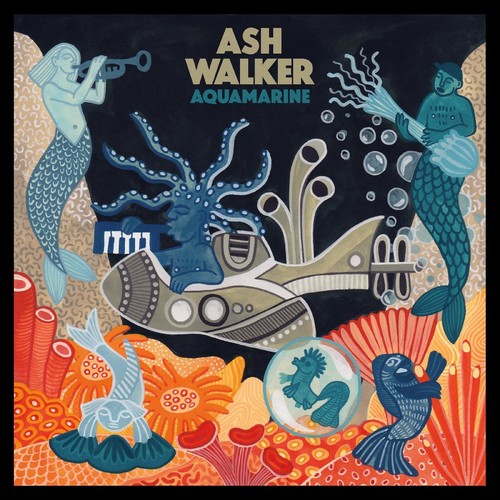 A heavyweight astral shower of rhythm and vibes, Ash Walker's third album Aquamarine is set for release on 12th July via Night Time Stories. An avid collector of jazz, blues, soul, funk, reggae, and all things in-between; Ash has DJed far and wide... from the infamous Royal Mail squat party to the canals of Venice, spinning vinyl in Brixton with The Specials to scattering dub across San Francisco and LA. Ashs production output is similarly exploratory: his journeys have taken him far and wide, from tunnels under the river Thames to recording local percussionists in the Atlas mountains of Morocco. Inspired by a deep dive of sounds from artists including Duke Ellington, Quincy Jones, King Tubby, Bo Diddley, 4Hero, J Dilla, Pete Rock, Curtis Mayfield, Philip Glass, and Steve Reich; his first two albums, Augmented 7th (2015) and Echo Chamber (2016) gained attention from the likes of BBC 6 Music DJs Gilles Peterson, Don Letts, Gideon Coe and Clash Magazine, XLR8R and MIMS. Aquamarine is a projection and culmination of all he's absorbed. A cosmic explosion of sound and colour, rhythm, shape and patterns. The arrival of an unassuming dreamer now projecting his unique flavour of expression. Aquamarine is the take-off of this audial spaceship, a sound discovered in the grooves of thousands of records, united in one. A meditation designed to inspire good energy, Ash hopes to bring a sense of calm and tranquility to the listener amongst the chaos of life. Recorded at home with the freedom of time and space, it combines analogue with digital, and a fondness for normally unwanted shapes and textures such as fuzz, hiss and crackle. My previous albums have felt to me more like ventures on land. This one feels more like a deep sea voyage into the subconscious. Living to dream with visions of grandeur. Manifesting a beautiful path to walk on. It was inspired by everything around me, from friends and family to art and design, engineering and architecture, movement and how we use our five senses. I love to try and push my own boundaries of what I perceive to be right and wrong, seeing mistakes as innovations, and obstacles as inspiration. Highlights on the album include Under The Sun, Time and Finishing Touch, all of which feature the smooth and silky voice of Laville. Themes of metaphysical exploration and transportation re-occur in the cosmic jazz of Brave New World and the smoked beats on Come With Us. Also featured across the album are trumpet and flugelhorn genius Yazz Ahmed, bassist Marc Cyril (Keziah Jones, Jr Walker & The All Stars) and renowned musician and producer Jonathan Shorten. Having already graced the stages of some of the biggest UK festivals as well as as The Jazz Cafe and Rich Mix, The Ash Walker Experience is a formidable six piece live lineup. Ash has collaborated with Ezra Lloyd-Jackson to turn each performance into a vibrant, multi-sensory experience combining live reactive projections and carefully crafted frequency complimenting fragrances. Previous press: A sound that is truly in a world of it's own Gideon CoeA real sense of flexibility. Lush sonics with a beatific vibe Clash MagazineDefinitely one to watch out for Tom RavenscroftAlways delivering solid, timeless grooves Don LettsRelentlessly Killer GroovesGilles Peterson
This website uses cookies to personalize content and analyse traffic in order to offer you a better experience.
I accept Learn More
back to top