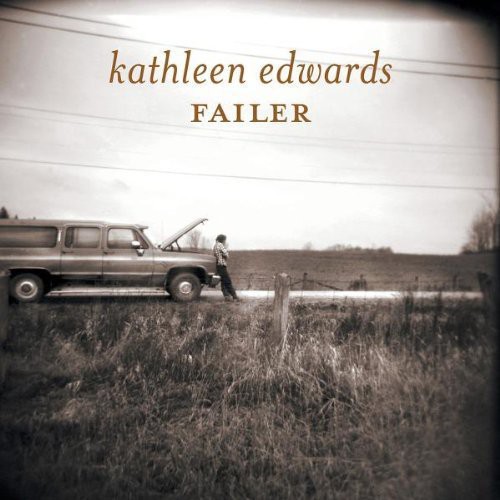 When "Failer" was released in Canada last year it got decent reviewsfor a debut album by a new artist, but since Rounder's Zoe imprint (thelabel's mainstream pop division distributed by UMVD, the conglomerate thatput out the album in Canada) picked up the album for stateside release, Edwardshas generated a full scale media feeding frenzy. High profile mags like Elleand Interview lined up features, she made her TV debut on David Letterman'sshow, and critics are salivating over her sultry good looks, cynical lyricsand the power of her backing band. Now we get to see if the album, and Edwards,can live up to the buzz.

"Failer" is a fine folk/rock album, and the band has solid chops.Several tracks, including "Six O'clock News" and "12 Bellevue"ride a huge, Roger McGuinn influenced guitar sound that brings to mind the Byrdsat their most gritty. On folky ballads like "National Steel" and "LoneWolf" the band weaves a subtle, acoustic web to support Edward's casualsing/speak vocals.

Edwards has a pleasing voice that contains hints of Suzanne Vega's laconicdeclamations, Dar Williams' easy melodic flights and Lucinda William'sunadorned warble. It's the kind of pleasant but not particularly compellingvoice that depends upon the material it's delivering for its power. Ontracks like "Westby" which tells the tale of a casual motel encounterbetween an underage girl trying to survive by selling her body to an older,working class ne'er do well, and "Sweet Little Duck" a sparseportrait of a woman slowly sinking into alcoholism while dreaming of a loverwho ignores her - or maybe the bathtub duck that symbolizes happier childhoodtimes – the voice is perfectly suited to the material. Edwards sounds asforlorn and beaten down as the lost souls she's singing about.

Other times the match isn't as perfect. "One More Song the Radio Won'tLike" is the kind of tunes rock stars often write bemoaning the pitfallsof success. It sounds odd coming from an artist whose waiting for her firstalbum to come out. "Maria" is a rocker about a man/woman leaving his/herlover, high on pills and booze. It's got solid rock'n'roll tracks,but here Edwards sing/speak style doesn't add any emotion or tension tothe tale. Sing/speak performers, Dylan and Lou Reed come to mind, often dependon the music to add drama to a song, and the arrangements here tend to the generic;they seldom allow the players, or the vocalist to build up the tension and releasethat could put the material over the top.
back to top