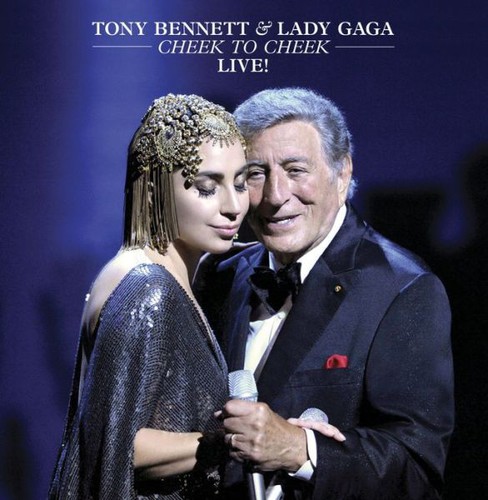 This summer, Tony Bennett and Lady Gaga took the stage for their first full live concert appearance in New York City and performed a special evening of songs, many of which from their critically acclaimed, #1 album, Cheek To Cheek. The DVD and Blu-Ray editions of “Tony Bennett & Lady Gaga: Cheek To Cheek LIVE!” will be released on January 20th, 2015 and feature 72 minutes of music and 19 songs - -showcasing both vocal duets and solo performances by these two legendary artists.

Tony Bennett & Lady Gaga: Cheek To Cheek LIVE! was taped at Jazz at Lincoln Center’s Frederick P. Rose Hall on July 28, 2014 and premiered on PBS’s award winning series, Great Performances this fall. The concert featured classic selections from the Great American Songbook, each handpicked by the artists, including “It Don’t Mean A Thing (If It Ain’t Got That Swing),” “Sophisticated Lady,” “Lush Life,” “Anything Goes,” and “Cheek To Cheek.” The DVD and Blu-Ray editions include additional songs not originally aired on television including, “They All Laughed,” “Lady’s In Love With You,” “Goody Goody,” “Bewitched, Bothered and Bewildered,” “Don’t Wait Too Long,” and “Ev’ry Time We Say Goodbye.” Throughout the concert, Bennett and Gaga demonstrate a strong camaraderie and affection belying the six-decade age differential, inspiring The New York Times to observe,” "In Tony Bennett & Lady Gaga: Cheek to Cheek Live!, this musical odd couple with 60 year age differences take on the Great American Songbook and prove again that the classics can bridge many divides" and The Washington Post to proclaim, "We’ll just remind you they’re actually both divine live performers and they’ve got great chemistry."

The album, Cheek To Cheek, debuted in September at #1 on the Billboard 200 Album chart and also hit #1 on the Jazz Album and Traditional Jazz Album charts. With the release of “Cheek To Cheek,” Bennett broke his own record, set in 2011 when “Duets II” debuted at #1 at the age of 85. Now at 88, Bennett remains the oldest artist in music industry history to have an album at the #1 spot on the Billboard charts. “Cheek To Cheek” marks Lady Gaga's third consecutive #1 album release in just over three years, making her the only female artist this decade to achieve this feat; this is the second time in Bennett's career that he has had an album debut at #1 in both Billboard's Pop and Jazz Album charts.