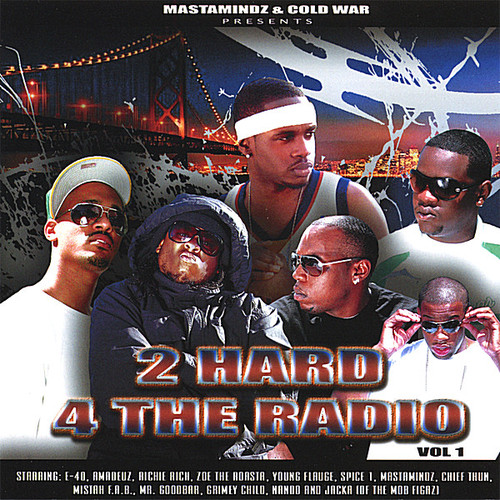 Hip Hop is dead, it's heroes are forgotten, it's pioneers are irrelevant, and it's power seems to be as divided as the many regions that have now been annexed into the mainstream as rap music is the new all powerful force that dominates the airwaves and controls popular culture. What was birthed as a social-political movement has now become a spectators sport resembling the WWF where today's newest rappers seem more like enslaved clones than activists, the culture has been transformed into a mere caricature of itself to be used for entertainment purposes only. Now as national play lists are given to radio and t.v, most would claim that the music has lost all originality and style....they say it has been watered down and diluted and long for the days when hip hop was raw. Well, with their debut mainstream release, Mastamindz and Cold War want to change all that with 2 Hard 4 The Radio, a project that directly reflects it's title....an all original street soundtrack album whose gritty content proves to be indigestible for the mainstream's intolerant stomach. Although 2 Hard 4 The Radio may at first sound like an album full of singles...it is as far away as you can get from the regular candy-coated bubble gum rap that dominates popular radio, with underground bangers like Mastamindz In My Scrapper and Zoe the Roasta's What It Do featuring Atlantic Records signee Mistah F.A.B, though mixed in with sure shot radio smashes like So Fly, featuring Mastamindz and Cold War, and the sweet serenading hood melody of Ghetto Love Song for the ladies. Added to that a flashback of original pre-hyphy Bay flavor in Bay is Back featuring E-40, Spice 1, and Richie Rich, 2 Hard 4 The Radio packs enough guest appearances to sell out a professional football arena. Though it could easily pass for an alum full of radio -ready singles....rest assured that the mainstream will not take too lightly the power of original street music from the underground....because it well threatens the very existence of today's clone based hip pop industry...as it is exactly what the people want.