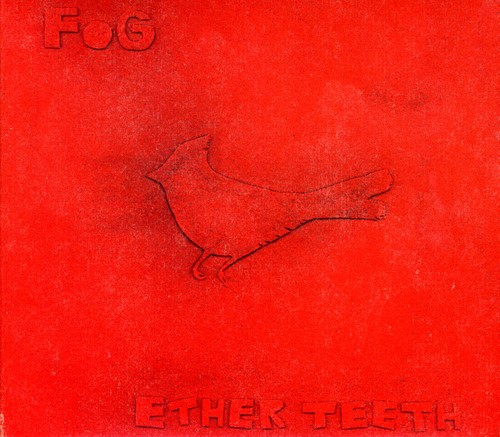 Ether Teeth, Fog's second LP, is in his own words, a heavy-headed hopeful opus, an urban vaudevillian symphony about birds, war and love. Recorded in sequence to 2 inch tape at Thrid Ear Studios in Minneapolis with Tom Herbers, ETHER TEETH finds Broder both expanding the range of his sound and becoming more focussed in his approach. And while often dark or melancholy, his lyrics never lose their sense of humour or thought-provoking imagery. He feels that, this time around, his vision of a collison of turntables, piano, poetry and god knows what else are fully realised.

It's hard to believe that Fog, AKA Andrew Broder, wasn't born in a bong, like most of the tracks on Ether Teeth. It's equally difficult to deny that the Minneapolis renaissance eccentric is intentionally taking his listeners on a long, bumpily perverse joyride through the chutes and tunnels of his exceedingly active imagination, pulling legs and jerking chains all the way as he cheerfully lets the steering wheel take care of itself.

To wit: he peppers album opener "Plum Dumb," a gently swelling guitar-and-sample confection, with the kind of sentimentality quotient one normally only encounters in softcore sex scenes and the occasional "Seventh Heaven" episode, with little bursts of turntablism that seem incongruous enough-until the track bursts into the fractured playground rock of "What a Day Day." Just when you think you're seeing the method to his madness, Broder rips into a series of changes that make you suspect he should replace the "F" in his project name with a "Pr," then ends the track with some guy chattering "terrible town" repeatedly.

In the end, Ether Teeth comes off like a battle of the bands between Nurse With Wound and Daniel Johnston, with Nurse taking the upper hand. Broder's work isn't willfully obscure, though. He's just playful, sort of like that uncle who habitually turned you upside down when you were little, whether you liked it or not. The difference is, it's himself Broder whips around like a three-year-old, both feet planted on terra firma. That's the trick.