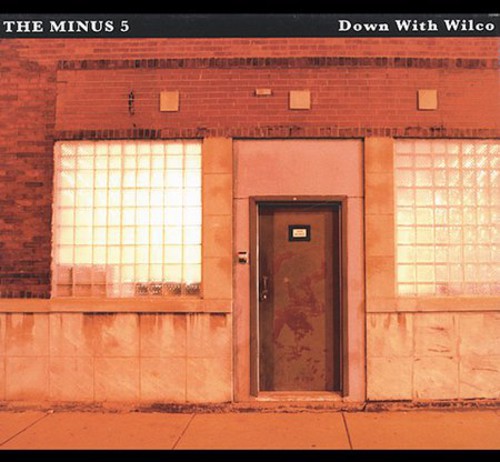 Down with Wilco
Artist: The Minus 5
Format: CD
New: Not in stock
Wish

Hey, Jeff Tweedy. You've just made one of the year's most acclaimedrecords, starred in an engaging movie detailing its contentious birth and rebirth,and seen your mug on every major magazine's cover as you invent a dozendifferent ways to tell the same story. Whaddya gonna do now? Well, if the newMinus 5 album is any indication, Tweedy packed up his dangerously-close-to-overexposedband and headed for McCaugheyland to make a brilliant parody of/homage to thewhole affair.

Down With Wilco is a great new Minus 5 album, filled with the kind of fracturedindie pop goodness that fans have come to expect from Scott McCaughey'serstwhile side project, featuring longtime co-conspirators Peter Buck (R.E.M.)and Ken Stringfellow (Posies), as well as Tweedy and the entire Wilco contingent.On Down with Wilco, McCaughey eschewed his established Minus 5 patternof recording basic tracks and collecting contributions from selected guestsby making the album in real time as an actual collaboration with Tweedy.

Down with Wilco succeeds on as many levels as it operates upon. McCaugheyessentially becomes Tweedy's funhouse mirror version of Jay Bennett, creatingsongs that logically advance the Minus 5 canon at the same time that they beautifullysend up the archly experimental pop of Yankee Hotel Foxtrot. From the noisyopener "Days of Wine and Booze" to the self-referential Americanapop majesty of "That's Not the Way That It's Done" to therocking confessional lope of "I'm Not Bitter," McCaughey andTweedy have masterfully spoofed and lovingly recreated the spirit of Tweedy'sown triumph of the will.

Hopefully they filmed the making of Down with Wilco. They could callthe movie "I Am Trying to Break Your Record."