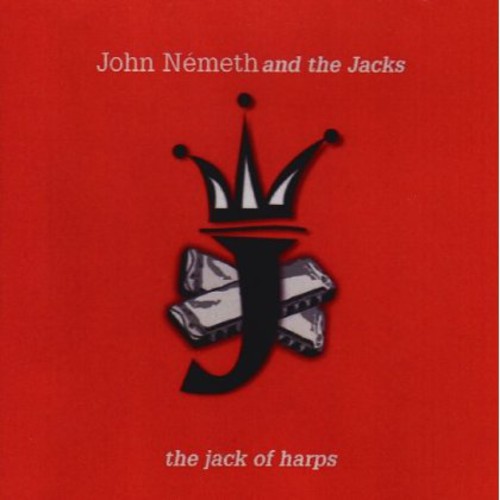 Announcing itself with a blast of amplified harmonica, The Jack of Harps proves over 10 tough, excellently recorded tracks that John NĂ©meth & the Jacks are stellar exponents of retro-style blues (with a touch of William Clarke-inspired jazziness on 'Fetch that Wood'). The original songs, including the excellent off-kilter 'Late Night Hour,' the soulful 'Up To No Good,' and the stop-time 'Love Zombie,' flash humor and quirkiness in appropriate measure. While NĂ©meth's confident vocals and Big-toned harp are center stage, the Jacks-- ace rhythm section of Rob Wilson (drums) and John Simpson (bass and Guitar), with Mike Trail and guest Andy Cortens (piano)-- display an enviable command of dynamics and interplay. Don't miss this. -Tom Hyslop, Blues Revue, 2003 What Critics Are Saying About John NĂ©meth 'Definitely one of the best club shows that I've ever seen. John NĂ©meth is simply the Blues artist that I feel is most deserving of more recognition. Check the man and his band out whenever you might get the chance.' Don 'T-Bone' Erickson, Founding Editor of Blues Wax, 2004 'Boy! John NĂ©meth can really belt it out!' Charlie Musslewhite, 2004 'I remember telling friends up North in '80 that they should go see Stevie Ray Vaughan, but they weren't impressed because he wasn't famous yet. It will give me great pleasure to say, 'I told you so!' about John NĂ©meth. You'll see.' Bob Margolin, Blues Revue Magazine, Dec/Jan 2005 'Definitely one of the finest new artist performing Blues in the country today. Catch him now so you can say you saw him in the early years of his soon-to-be giant career!' Greg Johnson, Blues Notes, 2004 'The show stealer of the afternoon was a vocalist with as many octaves as humanly possible or so it seemed. Either John NĂ©meth is one of the greatest vocalists in the world or this was the best performance of his life, or both. Write down his name, you will hear about him for many years to come.' Bob Horn, President, Washington Blues Society 2004 Bio John NĂ©meth is a traditional Blues singer whose style resembles that of B.B. King, Ray Charles and Junior Parker. His decade long career has found him opening for Robert Cray, Keb Mo', and Earl Thomas. Performing major music festivals around the United States, Scandinavia, and Canada as both a featured artist of the Junior Watson Band and fronting his band the Jacks has brought him critical acclaim. The Cascade Blues Association selected Nemeth as a crowd favorite at the Portland Waterfront Blues Festival in 2002, and the Washington Blues Society called him the show stealer at the Winthrop Rhythm and Blues Festival in 2003. He is considered a topnotch harp blower. Greg Johnson of Blues Notes writes, 'John NĂ©meth possesses rich harmonica tone that easily brings to mind Sonny Boy Williamson and Little Walter.' 'Come And Get It' is Nemeth's latest release, and features the Junior Watson Band. The album has received rave reviews and is currently climbing the independent blues radio charts. Bob Margolin writes, 'John NĂ©meth is a natural-born Bluesman, and he proves it with every note he sings, shaping each one with emotion, taste and inspiration. The subtle inflections and references to masterful singers bring fresh surprises with repeated listening.'