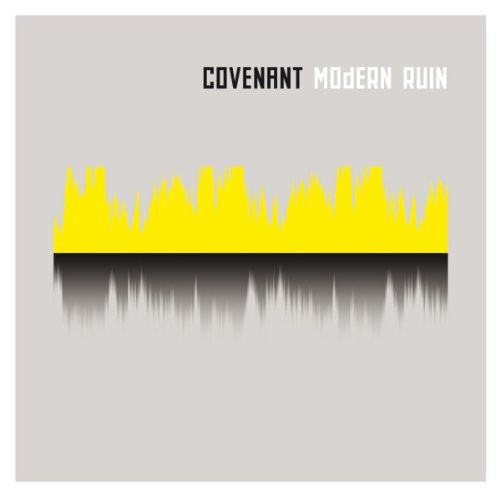 "Modern Ruin" is the latest chapter of Covenant's epic adventure in time and space. Ever a band that has consistently made references to being in motion, physical and mental travel, exploration of the hidden and the unknown. And again they have wondrous tales to tell us. Imagine a broken escalator coming up through the underbrush of a forest, stretching towards the treetops, no second floor left to receive it's long-gone passengers. In the background, among the trees, you can make out the steel skeleton of what was once a great building, perhaps the transit hall of an airport. Once this was a busy hub filled with people going places. Now Mother Nature is recycling the remains, in her infinitely slow but irresistible way. What happened here? How did it happen? Or, perhaps, could it be that nothing ever did happen the way it was intended to? Those are among the questions asked by Covenant on their 7th studio album "Modern Ruin". a title that implies a whole range of possible scenarios: A romantic lament over an epoch of optimism; a sense of imminent doom; futuristic archaeology; a cheeky comment on the state of the modern world... What does the band think? They won't tell. So we're left to explore for ourselves and there is a lot to discover among the ruins. As you travel through the ever-changing soundscape of "Modern Ruin" you get pummeled by frantic beats, lured astray by soothing melodies, drowned in the static noise of furious machines, gently carried along the streams of unknown waveforms, confused by contradictions. But you're never completely lost. There are familiar landmarks as well. They may not look exactly like they used to, but enough to guarantee safe navigation.
back to top