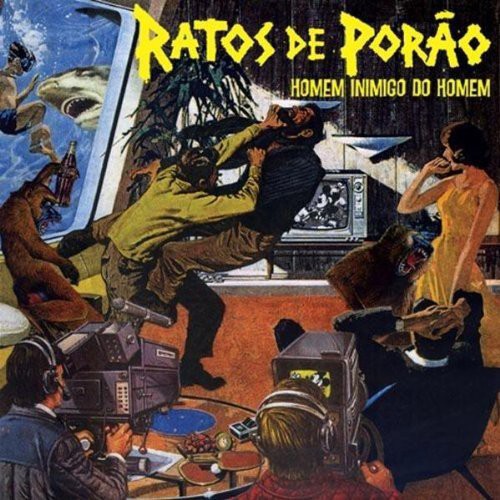 "Man, the enemy of men!!! White caucasian cancer corroding life mercilessly." These sweet words open Ratos de Porao's new album, Homem Inimigo do Homem, their first release since Onisciente Coletivo (Virus 265) in 2003. This album marks the band's 25th anniversary making them one of the oldest, continually active, and still one of the most intense bands in hardcore. Mixing riffs inspired by thrash metal with the most furious elements of the punk from the last 30 years, Homem Inimigo do Homem is simultaneously a return to their mid '80s sound and an antidote to the extinct trends RDP survived over the years. The verbal machinegun that is so peculiar to Ratos de Porao is a form of "Punk Journalism," spotlighting topics such as corruption and sex scandals in the Catholic Church, the still-existing problem of slavery in the Brazilian countryside, and the latest wave of commercial pop punk/emo frauds. Engineer Bernardo Pacheco and producer Daniel Ganjaman, who works with some of Brazil's biggest names in hip hop and rock, captures RDP's intentions, and gives Homem Inimigo do Homem a straight-ahead, organic sound that translates the '80s idiom into the modern age. In a country where nothing is ever certain, one can be sure that 25 years from now, Ratos de Porao will still be standing strong, dirtier and more aggressive than ever. For a band that has survived drugs, violence, trends and even morbid obesity, another quarter of a century will be a piece of cake.