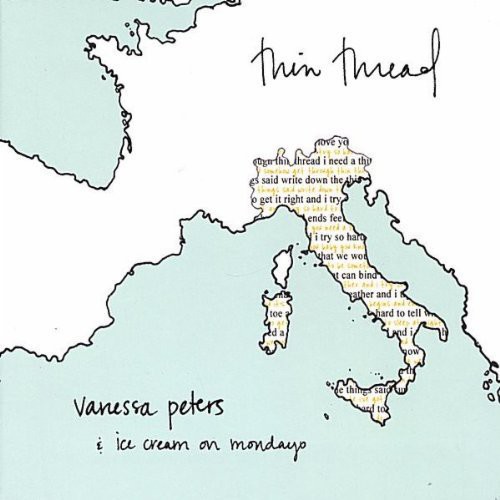 ...'the sweet, soulful sounds that can only come from such talented female vocals as were on display. Vanessa's voice strikes a note in the heart with her folk/indie styling while the lead guitar remains robust yet subtle, in the perfect combination, so as to not overpower the other's performance. Couple these two facets of the band together and you will thankfully and pleasantly be haunted for days to come. Whoever thinks that the girls are incapable of hanging with the guys is dead wrong in this situation.' - Ryan Mansell, Maroon Weekly Ice Cream on Mondays came to be from a series of rather fortunate and lucky coincidences. What started out as a summer band has turned into a full-time touring act, crossing continents and oceans to bring their music to the world. Here's the story, from the perspective of Vanessa Peters, the lead singer/songwriter and rhythm guitarist for the group: Everyone thought I was crazy when I decided to take a summer off of music and head back to Italy to be an aupair. Truth be told, I thought I was crazy too. But as fate would have it, the summer would turn out to be full of music - more than I could have ever imagined. The nanny gig didn't pan out, and I found myself back in my adopted hometown of Castiglion Fiorentino, Italy, washing dishes and writing songs during the afternoon siesta. I began half-heartedly looking for gigs, and as some friends had just opened a new outdoor café/pub, the Garden Underground, I inquired as to whether or not they wanted me to play. They said they would love to have me, but thought it was more of a band venue than a solo venue. They suggested that I try practicing with some local musicians who played together as the Resident Band at the Velvet Underground, their other bar in town. I was highly skeptical - my previous experiences with other bands hadn't really worked out, and I wasn't sure how what I assumed to be an Italian cover band would take to my songs. But I was ready to be playing again, and so I decided to give it a try....and as usual, it turns out my worry was for nothing. I was pretty nervous before the first practice. I wasn't sure how well they would speak English, or how well I would be able to explain what I was looking for in Italian. But it turns out I needn't have worried. With very little speaking of either language, they seemed to understand exactly how I wanted the songs to sound. The guys had been playing together for more than ten years, so it was as though they could read each other's minds - the arrangements fell together almost effortlessly. After the first practice, no one could believe how well it had gone. It was almost as though we had always played together. The energy, the connection...whatever you want to call it, it was there. Everyone was surprised, and no one as much as I was. We agreed to meet again the next night, and then the night after that, and before I knew it, every night had turned into a late night jam session, sometimes lasting till 2 in the morning in the garage. It was during one late Sunday night session that we christened ourselves Ice Cream on Mondays...but you'll have to come to a show if you want to hear the reason why.... We had our first show just three weeks after we started practicing, and it went phenomenally well. Everyone in the audience kept asking us - how long have you guys played together?? Only three weeks?? - and no one could believe it. I could hardly believe it. It seemed like such amazingly good fortune...to come to Italy, the place I love more dearly than any other, and find three incredibly talented musicians who loved my songs and loved playing with me. It was almost too good to be true. But like all good things, it had to end...for a while. We spent the rest of the summer playing gigs in Tuscany, recording an album, and planning our stateside tour for 2005. Thin Thread, our new album, was released in time for our American tour this January, and now VP and ICOM are on tour in Europe until the fall of 2005, when we will return to the States. It should be a busy next few months...time to Polish off the traveling shoes again, spit-shine the passport, and grab an extra pack of strings. The road (or the ocean) is calling and we've got songs to play. See you out there.