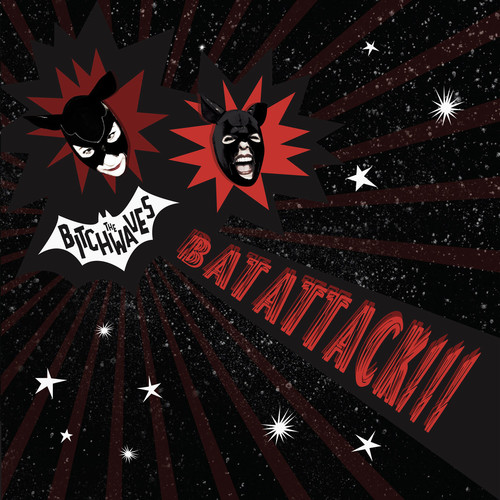 The Bitchwaves - Bat Attack (300 pcs, limited edition 7" on clear red vinyl). "Bat Attack" is the first release from trash n'roll bat duo The Bitchwaves from Trashylvania. Yes, that's right, they are bats! These bat ass gals deliver some primitive sounds and kick in the groin, face slapping, witty lyrics that will leave you unsure if you should be scared or thrilled. Baterella beats up the drums while Bitchlips Lovelylocks screams and trashes the guitar, wearing Mexican wrestling style bat masks and wings. Before even releasing any music or playing live they had over 1000 dedicated followers on Instagram from all over the globe. According to themselves they are not bad girls, just battylicious bitches that play primitive punky garage rock. But, better not mess with them, they paint their nails and lips with blood from spineless little shits... Hurry up and get your hands on this batastic release produced by Leadfoot Tea from Thee Gravemen. "Bat Attack" by The Bitchwaves and "Batty Flap" which is a remake of "Chicken Walk" by Hasil Adkins.
back to top