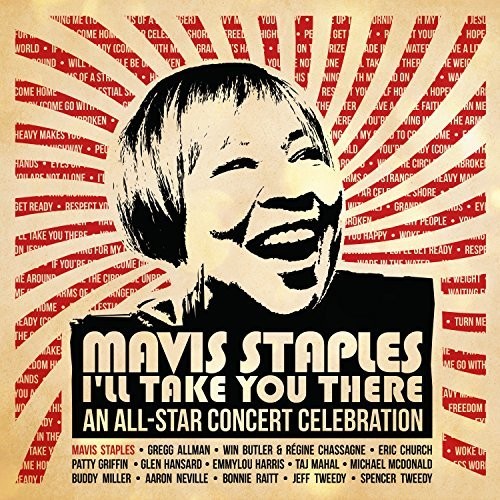 This historic, all-star concert featuring over twenty performances spanning many genres by artists including Gregg Allman, Win Butler & Regine Chassagne of Arcade Fire, Eric Church, Emmylou Harris, Bonnie Raitt, Jeff Tweedy and many more. Filmed at Chicago s historic Auditorium Theatre, this performance was a once in a lifetime event, bringing some of the biggest names in music together to honor the Rock & Roll Hall of Famer and American icon. Throughout an unparalleled career that spans over six decades, Staples soulful songs of justice and equality have become a soundtrack for the Civil Rights Movement, and inspired multiple generations of artists. In addition to the performances, I'll Take You There includes exclusive interviews with many of the artists, exploring Staples cultural and musical impact. The deluxe edition includes 6 extra songs plus a DVD of the entire concert including 2 songs not included in the broadcast version. Captured and presented in stunning HD quality with true Dolby 5.1 surround stereo, the full-length concert film and available audio recording spans Mavis career from her beginnings at Stax Records, all the way through her recent work with Jeff Tweedy and Ry Cooder. The collection features music from across Mavis' legendary career from the earliest Staples Singers songs through massive hits from their Stax heyday to her recent career resurgence with producers like Jeff Tweedy and Ry Cooder. Includes hits like 'Respect Yourself' and 'I'll Take You There' and transcendent covers like The Talking Heads' 'Slippery People' and Curtis Mayfield's 'People Get Ready.'