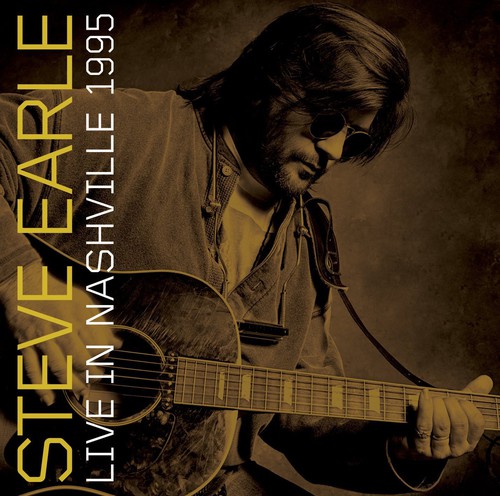 Live in Nashville 1995 is singer and songwriter Steve Earle's Nashville "comeback" concert, issued after completing rehab after a stay in a corrections facility. It was performed after the original Winter Harvest Productions issue of Train a Comin' (later picked up by Warner Bros.).

The studio album was released in February of that year, and this gig took place in the fall. This is the first time this disc is being released as a separate title, but it should be noted that those who purchased the box set The Warner Bros. Years already have it. On-stage, a hungry, newly sober Earle walks a tightrope of instinct and desire. His acoustic backing band consists of the same legendary cats who backed him on Train a Comin': Peter Rowan, Norman Blake, and Roy Husky, Jr. Also featured are guest appearances by Emmylou Harris and Bill Monroe. The songs are rooted in country, folk-blues and bluegrass, and string band music. The lion's share of this material is drawn from the studio offering, but these versions with their crackling loose energy are superior. Check the rag blues of "Hometown Blues," the thump and swagger in "Mystery Train, Pt. 2," the Celtic roots in "When Will We Be Married," and the sweet and roughshod "Sometimes She Forgets," as well as fun, back-porch readings of the Beatles' "I'm Looking Through You" and the Melodians' "The Rivers of Babylon," which finds Earle melding the reggae standard with Dobro, mandolin, upright bass, and acoustic guitar. It also features an excellent backing vocal from Harris. Also peppering this collection are excellent acoustic versions of the title track and "The Devil's Right Hand" from Copperhead Road, and the premiere of "You Know the Rest" that would appear -- thoroughly rearranged -- on El Corazón in 1997. This one contains a killer flatpicking guitar break from Blake. For Earle fans who didn't purchase the box, this is a real treasure, not a careless add-on to the catalog.