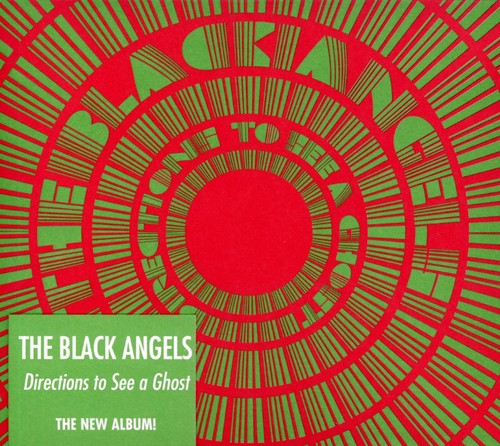 THE BLACK ANGELS are back with Directions To See A Ghost, the second full-length album from Austin s darkest droners. With tidal rhythms and rasping epics, Directions To See A Ghost is a driving, psychedelic mas­terpiece that churns through the album s 72 minutes and 11 tracks. This highly anticipated follow-up to the band s 2006 critically acclaimed debut will leave listeners buzzing.

''Directions to See a Ghost'' is the second album from Texas rock band The Black Angels. It was released digitally on April 15, 2008 by Light in the Attic Records. However, it was not until May 13th that the CD and 3xLP were released. Those who purchased the album digitally were given a code to download the album. On or after the date of release, it was to be brought back to the place of purchase in exchange for a hard copy of the album as well as a bonus four-song EP Black Angel Exit. Moreover, "Directions to See a Ghost'' features the song "Doves" also available on the "Doves" single 7" released the same day. Unlike the CD, the 3xLP contains bonus tracks "Surf City (Revisited)" and "Paladin's Last Stand."

The group have signed to the label Suretone, owned by Interscope, for releases after this album.

Prefix Magazine called it "an easy candidate for one of the best records of the year".

According to ''Rolling Stone'' magazine columnist David Fricke "...tripsters the Black Angels bring the aura of mid-1966 - the drilling guitars of early Velvet Underground shows, the raga inflections of late-show Fillmore jams, the acid-prayer stomp of Austin avatars the 13th Floor Elevators - everywhere they go, including the levitations on their second album, Directions to See a Ghost (Light in the Attic). Mid-Eighties echoes of Spacemen 3 and the Jesus and Mary Chain also roll through the scoured-guitar sustain and Alex Maas' rocker-monk incantations." - Wikipedia