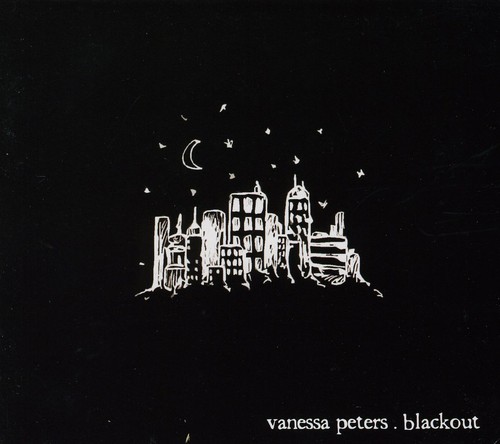 Since self-releasing her first EP, Mirabilandia, in early 2002, Vanessa Peters has gone on tour across America, Germany, Italy, and the Czech Republic while releasing two other albums, Sparkler (2003) and Thin Thread (2005). 2006 will see the release of two more albums - one of which is this acoustic EP. Blackout is a starkly acoustic album that features Vanessa's voice and guitar and is reminiscent of Patty Griffin's early work. Recorded by Salim Nourallah (Kristy Kruger, Rhett Miller, Nourallah Brothers), the stripped-down production allows the listener to focus on the building blocks of any good song - a lingering melody well-sung and well-played, and lyrics that carry their own weight. The songs are simple and direct, yet have a resonance far beyond the easy folk/rock categorization. A recent review says: 'The title track tells the story of the New York power outage shortly after September 11th, and two lost souls who find themselves speaking in the darkness; "The Hero and the Heroine" is a perfect radio song, just under 3 minutes, yet manages to spin a storytelling web in that short time, transporting the listener to a small Tuscan town and the lovers who live there. Her voice manages to be light and playful on that track, and dusty and despondent on "Afford to pretend." Her ability to change tone and setting with slight change in her voice's register is one of her greatest strengths as a performer.' Blackout features 2 acoustic versions of songs from 'Little Films' and 3 songs that will be released only on this EP. It is also a limited edition release. All copies are hand-numbered and signed, and when those copies are gone, they will never be reprinted. A digital version will be available via iTunes, etc, but when the printed copies are gone, they are gone!