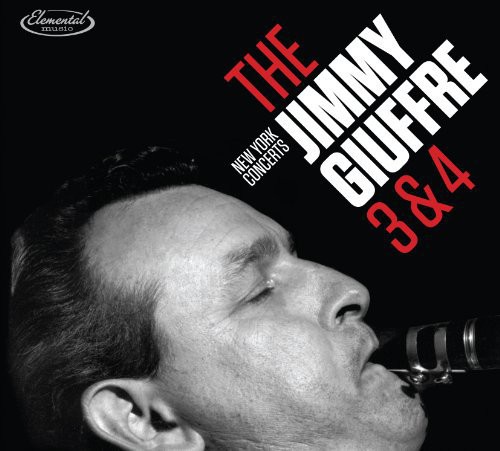 These recordings are the latest treasures to be unearthed from the seemingly inexhaustible troves of producer/engineer George Klabin, who in the last few years has also released essential 'lost' recordings by Bill Evans (Live at Art D'Lugoff's Top of the Gate), Wes Montgomery (Echoes of Indiana Avenue) and the forthcoming Charles Lloyd (Manhattan Stories). The Jimmy Giuffre 3 & 4's New York Concerts was brought to light through the passion and dedication of Klabin's partner in these releases, producer Zev Feldman, who brought the tapes to Barcelona-based Distrijazz founder Jordi Soley. Sharing a similar enthusiasm for the music, Feldman and Soley co-founded Elemental Music label as a home for Feldman to release more catalog discoveries, unreleased tapes or reissues of out of print records from bygone labels.

The first disc was recorded in September 1965 at Judson Hall during Charlotte Moorman's New York Festival of The Avant Garde, produced by saxophonist and jazz critic Don Heckman, on a triple bill with bands led by Heckman and Charles Lloyd. The concert marks the only performance by this particular trio with bassist Richard Davis and drummer Joe Chambers. Disc two travels slightly back in time to May 1965, with a performance in an empty Wollman Auditorium on the campus of Columbia University, then 19-year-old Columbia student Klabin had recently been appointed head of the jazz department at WKCR-FM, the university's radio station, and wanted to present original recordings as part of his show. He invited Giuffre with that goal in mind, and recorded his quartet - with Chambers, pianist Don Friedman, and bassist Barre Phillips.

The pristine sound quality reveals Klabin's prodigious talents at an early age, close-miking each musician and mixing live to a Crown 2-track tape recorder. The release was mixed, mastered, and restored by Klabin & Fran Gala at the Resonance Records Studios in Beverly Hills.

The tapes' welcome resurrection is accompanied by attractive and exhaustive packaging, with a 28 page booklet and liner notes by writers Philippe Carles and Bob Blumenthal (who interviewed Friedman, Phillips, and Chambers); background by Feldman and Klabin; and reminiscences by Guiffre's longtime collaborators Paul Bley, Steve Swallow, and the late Jim Hall. Giuffre's widow Juanita Giuffre also offers her thoughts and support