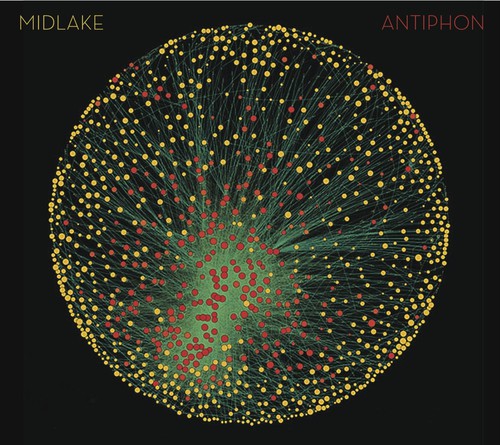 Midlake return with their new studio album 'Antiphon'. An antiphon is a call-and-response style of singing, from Gregorian chants to sea shanties. In the case of Denton, Texas' favorite sons Midlake, it's the perfect title for a bold response to a new phase in the band's illustrious career, with a re-jigged line-up and a newly honed sound as rich and symphonic as it is dynamic and kaleidoscopic.

Anyone who knows Midlake's preceding albums will recognize some constituent parts of Antiphon: the quirky psychedelia of 2004 debut Bamnan and Slivercork, the 70s soft-rock strains of breakthrough album The Trials Of Van Occupanther and the Brit-folk infusion of 2010's The Courage Of Others. But their fourth album is another fascinating departure, but also a logical progression. The sound is simultaneously familiar and changed. 'It's always through the scope of Midlake,' says vocalist/guitarist Eric Pulido, 'but on Antiphon we wanted to embrace the psychedelia, style and nuance you might hear in bands from yesteryear while also being aware of music influences leading up to and present now. The result was less folk and more rock. Less nostalgic and more progressive. Now the sky's the limit.'This growth is down to the ambition and ability of Pulido (vocals, guitars, keyboards) Paul Alexander (bass, keyboards, bassoon, guitars, backing vocals), McKenzie Smith (drums, percussion) and Eric Nichelson (guitars, autoharp), plus Jesse Chandler (keyboards, piano, flute, backing vocals) and Joey McClellan (guitars, backing vocals) from Midlake's last live incarnation. But it's also down to the absence of Midlake's former principal singer Tim Smith, who left the band in November 2012.In the fall-out over the spoils of what had been recorded, the remaining members decided to start afresh, and wrote and recorded Antiphon in six harmonious months bar 'Vale', which had been demoed without Smith during one of the sessions. With its ravishing, rippling textures symptomatic of Antiphon's scale, 'Vale' showed how far they'd already come. The remaining nine tracks the album is free-flowing in feel, concise in structure confirm it's very much Midlake, but uncannily rebooted, and relaxed.After the costumed antics of the band's last two album covers, the color-saturated globe on Antiphon takes a different tack, and a broader picture outside of Midlake's internal dynamic. 'It conjures imagery of a celebratory fireworks display,' Pulido suggests 'but it s actually a diagram of an exclusive group of connected entities with disproportionate amounts of control over the global economy. It's a beautiful way to show a darker side of things in the world.'Antiphon has a similarly paradoxical nature from stress and upset, something positive and creative has emerged. Midlake is dead, long live Midlake.