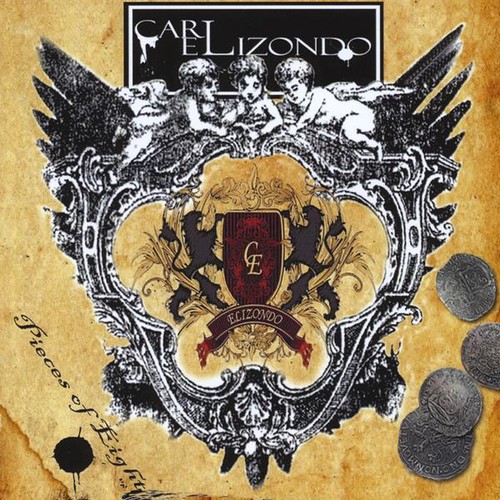 Carl continues to walk a line giving into his passions of heart felt pop and driven rock, depending on which of the voices in his head drive him on any particular day. As previously stated he's living in the U.S. with the Union Jack wrapped firmly around his heart. Carl gives his songs a Brit Rock feel, while still at the helm of production. He is further honing his skills on guitars, bass, keys, drums and vocals while keeping his hands firmly planted on the recording board, yes it is a world of one, and from what we are told, that's just the way Carl Elizondo likes it. Carl Elizondo marches to the sound of a different drummer, Himself! By Bobby Collini He's been at it again.... wrestling with the voices in his head! When not opening his big mouth, or feeling that everyone is out to get him, Carl Elizondo is tucked away in his studio writing, rewriting and arguing with himself trying to get the sound just right for his upcoming release 'Pieces Of Eight'. 'It's true! I feel as if I'm mad, writing and second guessing myself, looking for the right sound, whatever or where ever that may be, a mirror perchance?' I asked why the title 'Pieces of Eight'? Carl explains, 'The whole is worth more than the sum of it's parts, just like the Spanish coins of old, at least to me it does' Carl has been concocting his brand of rock for the past seven years. As a solo artist, he finds many twists & turns in his labyrinth of ideas. In 2006 he released 'The Crystal & The Cross', 2008 saw the sophomore release 'The Tomes Of Lore' and April of 2010 will deliver 'Pieces Of Eight', another collection off Brit-pop styled songs with a different flair 'I study the Stones, Beatles, Oasis, T-Rex, trying to ride a fine line between British rock & my idea of pop. In my head it works, but I have yet to find an audience that can either appreciate or understands what I'm trying to do.' Carl is still at the helm of his ship, writing each song playing guitars, bass, drums, keyboards, vocals, recording, engineering, mixing & producing each endeavor. One hell of a task for this helmsman who calls himself 'a drummer by trade', I queried as to why the drums aren't at the forefront of each song? 'I used to overplay, I'd fill each hole in a song as if it were a dam and I was a plasterer. In time I was taught, that less is more, so I just play the drums as a time piece and try to showcase the song itself. Music is my life's blood, and my reason for being, I hope to make music for many years to come, now if I could get others to understand that, I'd be a happy man' Carl says he is at work on his fourth release, as of yet to be titled... but for now we can look forward to 'Pieces Of Eight' due out April 1,2010.
This website uses cookies to personalize content and analyse traffic in order to offer you a better experience.
I accept Learn More
back to top