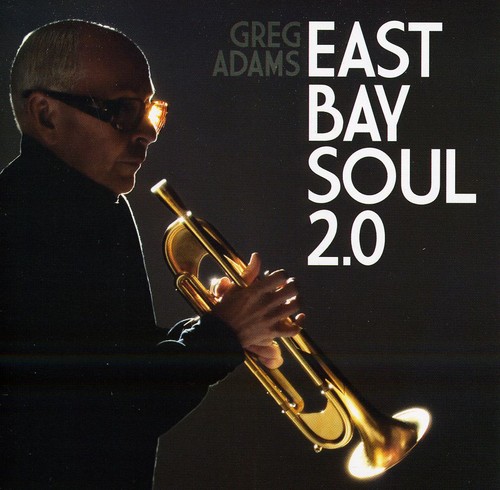 The sound of Greg Adams is one of the world's best-known musical signatures. A musical journey that has spanned nearly four decades from the time he first arrived on the San Francisco Bay Area music scene of the early '70s, Greg has been a driving force to define artistry that transcends musical genres, still seeking out a course not yet traveled, is at his best when set to explore a new artistic destination. For Adams it is always about the journey and where it will take him and he is always ready to go the. The journey continues with East Bay Soul 2.0- completely produced, arranged and co-written by Greg. A collection of 10 dynamic songs backed by his band East Bay Soul. Adams signature sound is clearly stamped through out the album's 10 tracks, an equal mix of instrumental and vocal songs- a blend of Funk Jazz, R&B and Soul. With a nod to the music Adams loves, and inked in his own style creates music that is relevant and fresh. Greg takes you on an incredible ride that is groove driven, weaving his horn melodies with soul drenched vocals into a collection of songs that are all at once dynamic and dreamy, cinematic and oh so to fall in love with. In what defines who he is, Adams owns the natural talent to produce the beauty of harmony and expression of emotion through his arrangements. They give this collection of songs their essence. With no set direction of where the music would go, Greg says, "I was surprised to see how many ballads I ended up with, but I'm really happy I did. I was also happy to have all the songs ready before the first down beat, so it really gave me the freedom to flesh everything out and let the songs breathe. Adams diversity has made him he consummate performer, setting no boundaries and seeking no labels. Greg has arranged, performed and recorded with countless artists as diverse as his career, including The Eurythmics, Rod Stewart, Lyle Lovett, Heart, Linda Ronstadt, Luther Vandross, Aaron Neville, The Brothers Johnson, Phish, Little Feat, Wilson Pickett, Huey Lewis and the News, Raphael Saadiq, Al Green, Quincy Jones, B.B. King, Everclear, Chicago, Bonnie Raitt, Dionne Warwick, Ray Charles, Peter Frampton, Billy Preston, Terrence Trent Darby, Josh Groban Madonna, The Rolling Stones and Celine Dion. Adams is a founding member of Tower Of Power, legendary for the horn arrangements that made the TOP horn section a sought out entity all it's own. Beginning early with his arrangements on Santana's "Everything Is Everything", Elton John's "The Bitch Is Back" Chaka Kahn's "Fool's Paradise" Little Feat's "High Roller and Heart's "Tell It like It Is" to name a very few. Greg has played on over five hundred recordings. You've heard Greg's collaboration with Paul Shaffer on the opening theme of Late Show With David Letterman and on score arrangements in such films as, Duets, Mask, Top Gun, Saving Silverman, Austin Powers In Goldmember with Smashmouth. Teaming up with Stanley Clarke on Little Big League and on Sgt Peppers Lonely Heart Club Band with the illustrious Sir George Martin. This very special recording boasts theÂ full strength of the rhythm and horn sections, performing in layers of percussive up-tempo instrumentals to lush romantic ballads sung by Darryl Walker. Walker possesses a true classic voice- an effortless delivery with complete commitment to the emotion of the song. There is a sense of adventure in the material written recently, beginning with the opening track "The Getaway" "I saw and heard something urgent about the opening notes of this song. That urgency keeps moving in and out of the entire track." The powerful Brassalicious, which Adams calls a "Horn Attack", is fueled by the chorus on this song, the genesis for the track. First the unison of the horns, then later to the full big band instrumentation. Adding, " I had a lot of fun on this one." The dreamy melody of "To Catch A Thief" features Greg's velvety Flugelhorn, inspired by the 1954 Alfred Hitchcock movie of the same title. He says, " In writing the song it conjured up the role played by, Cary Grant "The Cat" The classic groove anthem "What's Goin' On", immortalized by Marvin Gaye, is the disc's only cover song. Darryl's vocals are pure liquid gold and the track just breathes wide open with a pastel groove all it's own. "Once And For All" the classically lush ballad delivered with passion by Walker with it's vast string section is the palette that paints the richness of the song. The poignant "I'm Coming Home" speaks of the soldier coming home to the family he left behind. Adams says of this song "It literally dropped in my lap! I received an email from a fan with an untitled demo. Interestingly enough, I had only one open spot left in the line up for songs.Â I would have never seen this coming. After listening to just 60 seconds of the song, I knew it had to be on the CD." Fueling Adams' passion for his masterful new CD is the way it came to be and the sensational campaign to make it a reality... it was 100% funded by fans. "This project is a labor of love for so many reasons and a real treat to give back to the fans of my music and East Bay Soul. I really wanted to bring a variety of emotion to the project, songs that challenged me, moved me, hoping that it will do the same for the listener. Come along with us and join East Bay Soul 2.0!"
This website uses cookies to personalize content and analyse traffic in order to offer you a better experience.
I accept Learn More
back to top