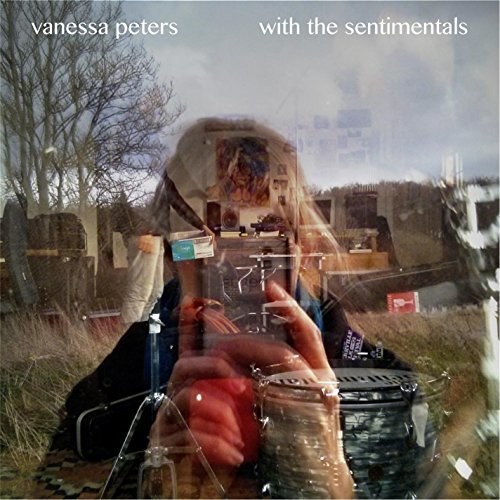 With the Sentimentals
Artist: Vanessa Peters
Format: CD
New: Not in stock
Wish

After the critical and commercial success of her Kickstarter-financed 2012 album "The Burn The Truth The Lies" and two years of touring in support of the album, 2015 will see Vanessa Peters releasing a new album and back in the studio working on another. The first, an album called With The Sentimentals, was recorded with her long-time friends and collaborators The Sentimentals, an Americana band based in Copenhagen. "We had already toured together twice in Denmark, and played shows together in Texas as well, and we felt like it was finally time to make a record together," she said. Vanessa and the band holed up in a pop-up studio in a farmhouse in the Danish countryside and recorded 5 tracks live with no overdubs. "The Sentimentals are a really fluid, organic band, and they work well like that - they like to do two, three takes of a song, and then move on. So we knocked out 5 songs in less than a day." The album will be released independently on January 20, 2015 and it's release will be followed by a 3-month tour in support of the album. That group of songs speaks to her folk singer/songwriter side, something fans have come to expect from her, but her most recent songs have been hewing ever-closer to rock-pop (in the vein of "Grateful" from her last album) and her latest batch of songs would fit in well on a playlist with Metric, Feist, Katie Herzig, or even the Italian band Perturbazione. Along with her husband and producer Rip Rowan (who also plays keyboards and drums in her band), Vanessa has been exploring new avenues of layered synth sounds, spooky vocals, and catchy pop melodies. With a set list comprised largely of new material, they've begun playing a number of shows as a duo, with Rip playing the drums and keyboard simultaneously and Vanessa taking the lead on acoustic and electric guitar, sometimes under the auspice of a "Vanessa Peters cover band" called Eunice and Bart. But for all the different formations, the roots are still the same. In the last ten years, Vanessa has played over 1000 shows in 11 countries, receiving accolades from abroad and in her hometown of Dallas, where she was recently nominated as "Best Folk Artist" by The Dallas Observer. She continues to tour the US and in Europe, where she has a strong fan base thanks to the albums she made with her former Italian band, Ice Cream on Mondays, and the hundreds of shows she has played in Italy, the Netherlands, Germany, Belgium, and Denmark. She expects to release two new albums in 2015 - the Americana-tinged album recorded With The Sentimentals, as well as an album of her own material co-produced with Rip Rowan. And who knows? "I've been dying to do a covers record for years," Vanessa says with a little smile. "Don't see why we can't squeeze that in as well." Reviews from "The Burn," "Sweetheart," "Little Films," and "Blackout" "All in all a lovely album. There are plenty of skilled musicians and exceptional vocalists around but not so many as lyrically adept as Vanessa Peters." - Americana UK "The singer-songwriter's fifth full-length, the album's rich with intimate observations and relaxed, natural musicianship even on exuberant anthems such as "Grateful." Her writing and unaffected deliver evokes Aimee Mann as well as the Weakerthans' John K. Samson" - David Greenwald, music critic for the Oregonian "Hooks a-plenty...there isn't a bad track on the record. I defy anyone with an ear for a catchy melody sung in a beautiful, rich, and completely engaging voice not to be enamoured with this baby." (8 of 10 stars) - Americana UK "Vanessa Peters and ICOM's "Sweetheart, Keep Your Chin Up" may well be my 2009 disc of the year." - Hickory Wind (USA) "Vanessa is a true poet and a brilliant singer/songwriter" - Rootsville (BE) "the best kind of singer-songwriter" - The Dallas Observer.