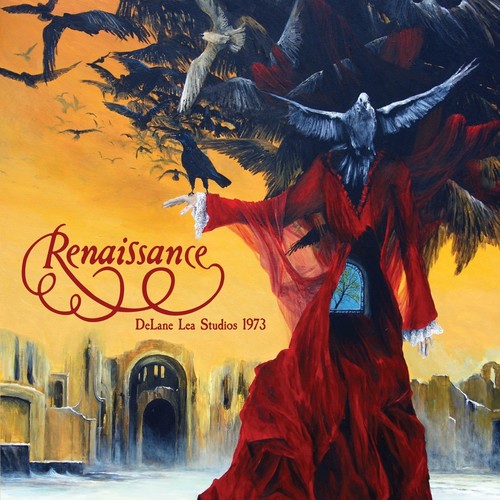 RENAISSANCE / DELANE LEA STUDIOS 1973 A captivating live-in-the-studio release from 70s prog rock icons Renaissance performing to a small gathering of friends at the historic de Lane Lea Studios (used by everyone from The Beatles to Queen, Jimi Hendrix & Pink Floyd)! Beguiling vocalist and ingĂ©nue Annie Haslam leads her group through nearly the entire fourth album Ashes Are Burning with special guest appearances by Wishbone Ashs Andy Powell and folk singer Al Stewart! The history of Renaissance is essentially the history of two separate groups, rather similar to the two phases of the Moody Blues or the Drifters. The original group was founded in 1969 by ex-Yardbirds members Keith Relf and Jim McCarty as a sort of progressive folk-rock band, who recorded two albums (of which only the first, self-titled LP came out in America, on Elektra Records) but never quite made it, despite some success on England's campus circuit. Their first album in this incarnation, Prologue, released in 1972, was considerably more ambitious than the original band's work, with extended instrumental passages and soaring vocals by Haslam. Their breakthrough came with their next record, Ashes Are Burning, issued in 1973, which introduced guitarist Michael Dunford to the lineup and featured some searing electric licks by guest axe-man Andy Powell. Their next record, Turn of the Cards, released by Sire Records, had a much more ornate songwriting style and was awash in lyrics that alternated between the topical and the mystical. The group's ambitions, by now, were growing faster than it's audience, which was concentrated on America's East Coast, especially in New York and Philadelphia - Scheherazade (1975) was built around a 20-minute extended suite for rock group and orchestra that dazzled the fans but made no new converts. A live album recorded at a New York concert date reprised their earlier material, including the "Scheherazade" suite, but covered little new ground and showed the group in a somewhat lethargic manner.
This website uses cookies to personalize content and analyse traffic in order to offer you a better experience.
I accept Learn More
back to top